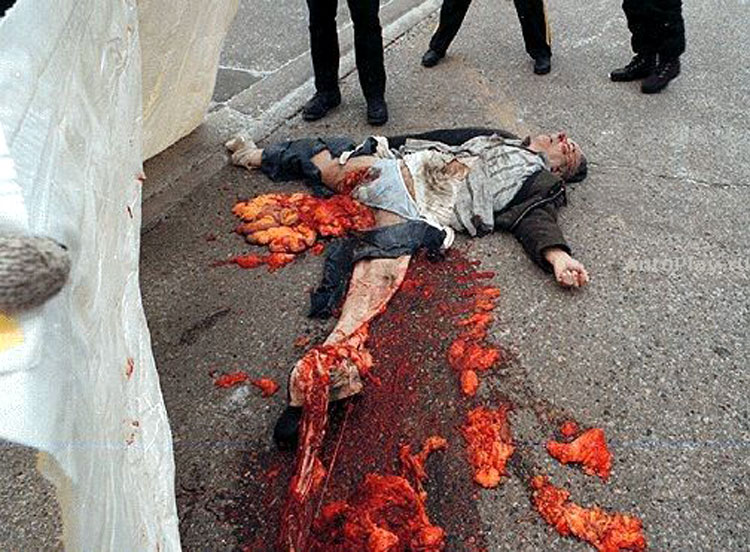 Are you convinced the body is fake? If not, I ask you to consider very, very carefully why not. A very prominent characteristic of psyops is that the fakery is rubbed in our faces (see They tell us clearly). I'd make the perfectly reasonable claim in my opinion that not only is the body fake there is little effort to make it look real. It is, in fact, very obviously fake. Similarly, for example, the perps do not try to hide the fact that the shooting of patsy, Lee Harvey Oswald, is staged in their presentation of a photo of the shooting that cannot possibly be matched against any still in the alleged "live TV shooting" of Oswald (see LHO Shot TV/Photo comparison). Additionally, the shooting on "live TV" is not particularly convincing and from the moment of the sound of gunshot to Oswald's mouth opening to crowding of him by others is so lightning fast there would simply be no time for a photographer to take a shot. What staggers me is that even when I bend over backwards to describe the obvious fakery in the best way I know how, people will still challenge it, including the fakery of this body and the staging of Oswald's shooting.

In challenging the claim that the body is fake, a person I've been in discussion with, citing the allegedly analogous example of the contents of a head being disgorged on impact with railway tracks, argued that the flesh-coloured fabric may, in fact, be a tube of flesh from which the contents of the leg have been disgorged.

This possibility, however, has virtually nothing to support it as:
--- the tube seems to extend quite a length and we see no sign of a foot having been severed in the process of any disgorging
--- there is nothing particularly flesh-like about the tube - the colour is not convincingly flesh-toned nor does the material seem skin-like, it certainly seems more fabric-like
--- a leg (which has the characteristic of having a foot attached) is a very different proposition from a small round head
--- there are other elements which suggest the body is fake - not to mention many other elements relating to death and injury that support fakery.

Unfortunately, it is a very common inclination among people to "cherry-pick" in this way, that is, to put forward, as if it in some way debunks the argument they challenge, a possible alternative explanation for a piece of evidence that, on scrutiny, proves to be far less compelling than the possibility argued for, especially in the context of all other evidence.