The difference between treason and patriotism is only a matter of dates.

The 2001 anthrax attacks, also known as Amerithrax from its FBI case name, occurred within the United States over the course of several weeks beginning on September 18, 2001, one week after the September 11 attacks. Letters were mailed containing anthrax spores to several news media offices and to Democratic Senators Tom Daschle and Patrick Leahy, killing 5 people and infecting 17 others. A copycat hoax letter containing harmless white powder was opened by reporter Judith Miller in The New York Times newsroom. According to the FBI, the ensuing investigation became "one of the largest and most complex in the history of law enforcement".

A major focus in the early years of the investigation was a bioweapons expert named Steven Hatfill who was eventually exonerated. Another suspect was Bruce Edwards Ivins who became a focus of investigation around April 4, 2005. Ivins was a scientist who worked at the government's biodefense labs at Fort Detrick in Frederick, Maryland. On April 11, 2007, Ivins was put under periodic surveillance and an FBI document stated that "Bruce Edwards Ivins is an extremely sensitive suspect in the 2001 anthrax attacks." On July 29, 2008, Ivins committed suicide with an overdose of acetaminophen.

It was only a couple of days before attempting my Occam's Razor exercise on this event that it occurred to me it may well have been a false-flag hoax rather than real or a false flag. As soon as I started looking at the evidence, even the entry on Ivins' counsellor on the Bruce Ivins' Wikipedia page made me chortle. The alleged evidence is so convoluted, lacking in substance and beyond ridiculous it's hard to know where to start.

Just like death and injury on 9/11 shortly before, evidence shows that the claims of death and injury from anthrax attacks is false and we see similar elements such as truther-targeted propaganda and signs from the power elite that they have staged the attacks.

Hypothesis 1a (H1a) - The claim that anthrax attacks happened at all is false and thus there was no perpetrator.
Hypothesis 1b (H1b) - All claims about Bruce Ivins other than about his profession are false.
Hypothesis 1c (H1c) - Truther-targeted propaganda is used to suggest the attacks were an inside job
Hypothesis 1d (H1d) - The paucity and lack of convincingness of the evidence, the ridiculousness of the method used to conduct the attacks and of many aspects of the story itself are signs from the perpetrators that it is a hoax.

1. Paucity of evidence of death and sickness - We are told that 5 people died and 6 became sick from the more lethal inhalational variety while 11 became sick from the more common cutaneous variety. There are very few images of those alleged to have died or have survived the attacks. The only image I can find of a sufferer showing signs of anthrax infection is Pat O'Donnell. The image is low resolution and the lesion does not resemble anthrax infection shown in other images. This snippet on Pat O'Donnell in this Postal Reporter blog 10 years later on his continuing extreme suffering is farfetched when you look at his seeming single lesion (and explains the crudely-named commenters' little sympathy which, judging by the similarity of style and the fact that the comments actually have the title '17 thoughts on “Postal Worker Exposed To Anthrax Facing Different Dilemma Over Transfer Request” ', suggests it is really the perps amusing themselves in very juvenile fashion. I wonder if this sort of writing is in agents' curriculum).​ 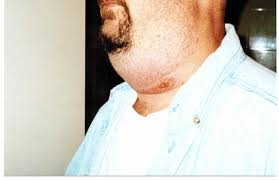 2. Bruce Ivins - photos give no sense of reality - It is hard to get a feeling of reality about Bruce Ivins. There are no photos of him taken that show signs of contemporaneity with the period from the attacks until his death. Nor are there any photos of him with his reported twins or his wife and the only picture of his wife is one where she has her head turned. In this 2008 article, A Scientist's Quiet Life Took a Darker Turn in the Washington Post the only photo shown is a 1983 profile shot where it is claimed he is teaching children to juggle although there is nothing in the image to suggest this. Why such a dated photo?

3. Bruce Ivins - reporting of mental health problems not credible
We are told that he had serious mental health problems but the reporting of these problems is not convincing and contains anomalies. His alleged therapist Jean C. Duley has a history that does not seem to match her occupation and we have to wonder why we see quite a bit reported by her about Ivins but very little by the psychiatrist Dr David Irwin he consulted. Below is the section on the Wikipedia page on Bruce Ivins, Allegations by Ivins' counselor. It has no credibility. There is a YouTube interview with Jean Duley but there is nothing from Ivins' psychiatrist that we can grasp onto - no photo, nothing.

One of the most contested elements of the Ivins case involves the testimony of his former therapist, social worker Jean C. Duley. Documents show that Ivins was ordered late in July 2008 to stay away from Duley. ... Duley wrote that Ivins had stalked and threatened to kill her and had a long history of homicidal threats. However, in her testimony, Duley also stated that she had only known Ivins for six months.

Duley had been set to give testimony against Ivins on August 1, 2008. Ivins, however, had no criminal record, whereas Duley herself has a history of convictions for driving under the influence and charges of battery by her ex-husband. The charges forced her to quit her job, and attorney costs used up her savings, according to her fiance. In a 1999 newspaper interview, Duley described herself as a former motorcycle gang member and drug user: "Heroin. Cocaine. PCP. You name it, I did it." According to an article originally appearing in the August 12, 2009 Frederick News-Post, Duley was under house arrest when she tape recorded Ivins' allegedly "threatening" messages. The Frederick News-Post also made available a recording of the allegedly threatening calls. The nature of the actual audio recordings was characterized in the published report as "No threats are made or implied in the messages. More the sad ramblings of a broken man who felt betrayed."

In her July 2008 restraining order Duley alleged that Ivins "has a history dating to his graduate days of homicidal threats, actions, plans, threats & actions towards theripist" [sic]. According to Duley, "Dr. David Irwin his psychiatrist called him homicidal, sociopathic with clear intentions" [sic] and she would "tetisfy with other details" [sic]. She further alleged a "detailed homicidal plan" to kill his co-workers after learning he was going to be indicted on capital murder charges and stated that, upon hearing of his possible indictment, Ivins had purchased a gun and a bulletproof vest. Ivins was subsequently committed for psychiatric evaluation, and his home was raided by federal agents who confiscated ammunition and a bulletproof vest. He was released from his committal on July 24, five days before his death

"Every time I talked to him, nearly, he would mention [Kappa Kappa Gamma sorority]," says Haigwood. "And finally I said, 'You know, Bruce, that's enough!'"

Nancy Haigwood says Bruce Ivins was obsessed with her sorority.

Ivins' obsession with Haigwood and her sorority continued years after they graduated from UNC. Ivins had started his job at the U.S. Army Medical Research Institute for Infectious Diseases -- USAMRIID -- at Fort Detrick, Maryland, in 1980. Haigwood, too, was living and working in suburban Washington.
One day in 1982, she came home to find her sidewalk, fence and car spray-painted with red graffiti: "K K Γ" -- the Greek letters of her sorority.

"Because of the Kappa connection, I immediately thought of Bruce Ivins," Haigwood said.

Five months later, the Frederick News-Post published a letter to the editor under Haigwood's name. The author, purporting to be "a member of Kappa Kappa Gamma," defended fraternity and sorority hazing by as a way to "strengthen the mettle of pledges" and "build loyalty ... in the all-important weeding-out process."
Nothing could have been further from Haigwood's true beliefs, she says.

After calling the newspaper to disavow the letter, Haigwood called Ivins to confront him. "I said, 'This can only be you and you have to stop'" Haigwood says. "He said he didn't do it. But, of course, then, I knew he was lying."

5. Difference between "hoax" and "real" attacks? - One has to ask the question. We were told of hoax anthrax attacks around the same time as the real attacks and, in fact, from a time before the real attacks to the present, hoax anthrax attacks regularly make the news. Apart from the word "hoax" preceding "anthrax attacks" what evidence exists of any difference between "hoax" and "real" other than the fact that we're told people died and suffered with a few unconvincing photos thrown in? The fact that they reported the hoax attacks around the same time could be interpreted as a signal that the supposedly real ones were also hoax as the detail of the reporting is so unconvincing.

​6. Truther-targeted propaganda - letters targeting media organs who published unbecoming photos and tawdry headlines about the Bush twins
Letters were addressed to both the National Enquirer and the New York Post. The first person to die from the anthrax attacks was Robert Stephens, a photo editor for the parent company of the National Enquirer, American Media Inc. Bob Ivins had no known motive for targeting this quarter (or indeed any of the addressed quarters) but we find on the internet a remotely plausible motive for George Bush (I have to admit with embarrassment that I swallowed it myself). The National Enquirer published photos of his daughter, Jenna, "falling down drunk" while the Post published a plethora of articles on the Boozing Bush Twins.

7.  Truther-targeted propaganda - Tom Daschle
While Tom Daschle is shown to put up seemingly important objections to warrantless wiretaps in the wake of 9/11 I think he's a very suspect character. He is currently a political lobbyist as is his wife, is on the board of directors of the shady Center of American Progress. and has co-written a book, Crisis Point, with Republican senator, Trent Lott.
​
His words on 9/11 were: "the vice president expressed the concern that a review of what happened on September 11 would take resources and personnel away from the effort in the war on terrorism. I acknowledged that concern, and it is for that reason that the Intelligence Committee is going to begin this effort, trying to limit the scope and the overall review of what happened. But clearly, I think the American people are entitled to know what happened and why." [63]
Of course, Tom Daschle has not brought out any truth about 9/11 whatsoever.

His being an alleged target could easily be truther-targeted propaganda to suggest the reason for the targeting was for his stated objections to measures the Republicans wanted to implement post-9/11. But good ol' Tom just seems to get along fine and dandy with all sides and simply makes the right noises where required.

8. Stephen Hatfill, fake suspect - Before attention turned to Bruce Ivins, Stephen Hatfill was a "person of interest", however, we are given nothing that even sounds like a reason for him to be considered such a person.

Stephen Hatfill, Wikipedia
"The resulting report, dated February 1999, was subsequently seen by some as a "blueprint" for the 2001 anthrax attacks. Amongst other things, it suggested the maximum amount of anthrax powder – 2.5 grams – that could be put in an envelope without making a suspicious bulge. The quantity in the envelope sent to Senator Patrick Leahy in October 2001 was .871 grams.[18] After the attacks, the report drew the attention of the media and others, and led to their investigation of Patrick and Hatfill.[19]"

Also, in Wikipedia, it is stated, "At a news conference in August 2002, Hatfill tearfully denied that he had anything to do with the anthrax letters ...". We can see in the video, that "tearfully" refers to Hatfill wiping his eye which gives no signs of containing any tears (a common action in staged events).​